I’ve become very interested in soursop, and so I have been looking for a reliable source of good fruit. So I turned to Amazon, because I’m a Prime member, so I can get product for free on a two-day shipping here in the U.S. When you search the site the product GFruit comes up immediately. And so I bought it.

It arrived two days later, neatly packed in bubble wrap. The GFruit branding is great. A curvy jar with a seal on the top. When you open it, it makes that nice pop sound as the vacuum is released.

What Amazon says about Gfruit:

Soursop Graviola Guanabana exotic fruit by Gfruit. This is NOT a Juice, it is 100% Healthy Fruit See Gfruit on Amazon
Buy Soursop Products

Inside is the actual fruit pulp, scooped from the inside of the spiny green protective skin. Think of how an avocado is. Tough protective skin with soft fruit inside.  The fruit grows on the the graviola tree. It is in a soupy white liquid with chunks of the fruit in it. The soursop seeds are also still in the flesh and can be spotted because they are about 3/4 inch long and brown to black in color. (They will germinate if planted.)

The fruit itself in the first jar I purchased was sour, which is not the way I expected it to taste. Ripe fresh soursop is sweet, and tastes like strawberry-banana or, some say, pineapple-mango. I suspect that the fruit in my jar was still unripe when it was vacuum sealed.

The second jar I bought was much better.

If you look at the reviews on Amazon, they are mixed. Some people say the fruit in their jar was delicious, other say it was overripe or sour. This suggests that the company that produces this product is having trouble gauging ripeness and is either packing underripe fruit or overripe fruit, sometimes getting it right.

Overall, I’d give the product a 4 out of 5 stars for inconsistency. Picked, ripened to soft, then opened is better. But this produce is decent, if inconsistent. And it is an affordable way to get the glorious soursop on demand into your deserving tummy. But the best way to eat it is fresh soursop from a farm.

Nearly as good as the fresh fruit off the tree that I remember. Here's how to a good dessert: After removing the seeds, grind the soursop up with a Magic Bullet or Ninja food processor. Then add sugar to taste. Delicious!

Great product, I am reliving my youth.. I grew up eating this fruit daily, and it has not changed.

People have written that this fruit is delicious, but the fruit I received tastes truly vile. I don't know if it is spoiled or if this is the way it should taste. If so, it is definitely not delicious! 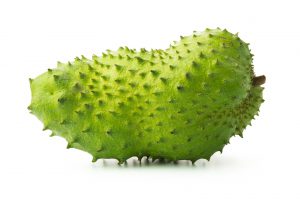 Soursop is a fruit that some researchers believe could help cure cancer.

The flavor of the soursop fruit is distinctly tropical. It can be described in a variety of ways. Here are some of the ways the tropical fruit’s devotees describe it when it lands on their palate.

Many of the fruit’s fans say the taste of soursop is exotic and lovely. It has flavors that are is a combination of: Strawberry and pineapple, with sour citrus flavor notes that contrast with its creamy texture, which is similar to the flavors of coconut and banana.

Other soursop lovers claim the spiny and strange-shaped fruit tastes like a combination between a mango and a pineapple. Some say sweetness prevails with a backend tang. Others claim it is more pineapple-flavored, with hints of mango.

Here is yet another take on the flavor of soursop: It has a delicate fragrance that is tropical, fruity, musky. It has a sour profile, but is sweet enough.

On this point, there are some that claim it is very sweet. It can taste like a combination or mixture of three flavors: pineapple, banana and papaya.

Mark Twain called the cherimoya, a near relative of soursop: “deliciousness itself.” (See more Mark Twain quotes). He said: “We had an abundance of mangoes, papaias and bananas here, but the pride of the islands, the most delicious fruit known to men, cherimoya, was not in season. It has a soft pulp, like a pawpaw, and is eaten with a spoon. The papaia looks like a small squash, and tastes like a paw paw.” This is from a letter he wrote that was published in the Sacramento Daily Union on October 25, 1866, and details his travels in Hawaii. Mark Twain called the taste of soursop “deliciousness itself”

There is some distinction between the Soursop and Cherimoya, which are related fruit. Think of them of how there are similar varieties of apples or avocados. Cherimoya fruit has a flavor described as a blend of bananas, pineapples, pears, lemons and other tropical fruits. The fruit is four- to eight-inches and is heart-shaped. It opens easily to reveal a white, sweet pulp and small coin-sized hard black seeds.

Journalist Joan Namkoong, writing in Honolulu magazine described the taste of cherimoya this way: “Inside is smooth, cream-colored, custardy flesh that hints at the flavors of pineapple, mango, passion fruit, banana and lemon.”